Siren of the Tropics (Table of Contents) 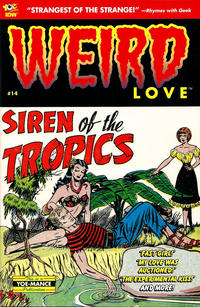 Siren of the Tropics (Table of Contents: 1)

The G.I. and the Fraulein (Table of Contents: 2)

Genre
romance
Characters
Lisa Frank; Pete; Major Merrill
Synopsis
Pete is an American soldier stationed in occupied Germany. He and local girl Lisa fall in love. Pete wants to marry her and bring her to the USA, but he finds some Nazi documents in her house and thinks her family was involved with them. They quarrel. Pete’s commanding officer says Lisa’s father is a scientist working for the Americans and that’s why he had the documents. Pete and Lisa reconcile and will wed when she and her father emigrate to the USA.
Reprints
Keywords
Occupied Germany; skiing

Lisa is spelled "Liza" in the splash panel.

My Love Was Auctioned (Table of Contents: 4)

The Experimental Kiss (Table of Contents: 5)

This reprint credits the artwork to Frank R. Sieminsky.

This reprint gives the details for the previous story.