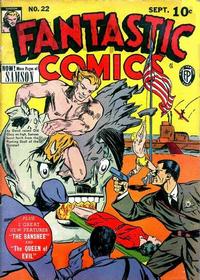 The Death Mark of the Dragon! (Table of Contents: 1)

The Who's Who also indicates that Carreno did this feature.

[The Abducted Envoy] (Table of Contents: 2)

[An Undying Evil] (Table of Contents: 3)

Genre
fantasy-supernatural
Characters
Nagana [Queen of Evil] (villain, introduction, origin); Kalkor (introduction); Isis
Synopsis
In Thebes, 1000 BC, Nagana is "called the daughter of Isis", a faithful worshiper, but she is envious of the goddess' hold over the city and plots evil. Isis strikes back at her, leveling the temple, and Nagana spends the next 3000 years as a statue until archaeologists uncover her and she comes back to life. Isis realizes that she cannot destroy Nagana directly, so she resurrects Kalkor, a faithful worshiper and priest-to-be that had stood up against Nagana in Thebes.

[Peril in Shanghai] (Table of Contents: 4)

[The Scorpion Strikes Back] (Table of Contents: 5)

[The Airplane Kidnapping] (Table of Contents: 6)

The Rescue of Lady Rowena (Table of Contents: 7)

[Derelicts of the Black Gas] (Table of Contents: 8)

Last appearance during the 1940s.

The Courier-News of Bridgewater, New Jersey, had a filler article printed on Monday, February 21, 1944 (page 6) which talks about U.S. Army Air Corps Technical Sergeant John W. Fawcett awaiting his next assignment after taking part in 25 bomber missions over Europe. It mentions that before he joined, he wrote Space Smith. Exact stories at this time are not known. Article provided by Steven Thompson and posted to the Comics History Exchange page on Facebook (25 December 2016).

[A roadster whips down the street...] (Table of Contents: 9)