Tied with Patsy Walker (Marvel, 1945 series) #95 (on sale date the same) as first use of MC brand, which is considered to be the first use of the company being called Marvel Comics in the 1960s.

I Was Captured by Korilla! (Table of Contents)

Cover inker credit from Nick Caputo via the GCD Errors list, December 2008. Original indexer had not credited an inker. 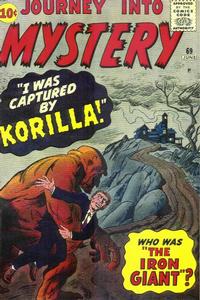 I Was Captured by...Korilla! (Table of Contents: 1)

Job Number
V-189
Genre
science fiction
Characters
Korilla
Synopsis
A cab driver uncovers an alien plotting an invasion of Earth. The police won’t believe him, but he foils the invasion on his own and the aliens are killed by their masters for their failure.
Reprints

Job Number
K-19
Genre
fantasy-supernatural
Characters
Eli Twiddle; Mr. Hardy
Synopsis
A travel agent has the ability to travel in his dreams, but eventually he grows out of it.
Reprints

The Iron Giant! (Table of Contents: 3)

Job Number
V-190
Genre
horror-suspense; western-frontier
Characters
Ben Perkins; Wharton
Synopsis
A train conductor in the Old West, who loves his locomotive, is robbed by bandits and left in the wilderness to die, but the bandits are chased to justice by the suddenly-animated locomotive.
Reprints

Job number from Tom Lammers and Ger Apeldoorn via the Atlas/Timely discussion group.
Story is pages 20-24 of comic (pages of story numbered 1 to 5).

When Darkness Falls!! (Table of Contents: 4)

Job Number
V-191
Genre
fantasy-supernatural
Synopsis
A man sees mannequins move during the business hours of the store, and stays until closing. When the mannequins step down from their positions he berates them for nearly being caught, since he was another living mannequin all along.
Reprints

Job number from Tom Lammers and Ger Apeldoorn via the Atlas/Timely discussion group.
Story is pages 28-32 of comic (pages of story numbered 1 to 5).