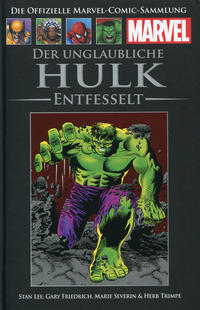 Genre
Superhelden (superhero)
Characters
Hulk [Bruce Banner]; Heimdall; Odin; Warriors Three [Hogun; Fandral; Volstagg]; Loki
Synopsis
Loki pulls the Hulk to Asgard to fight his father's forces. The Hulk battles the Warriors Three but in a moment of rare clarity, they discover that the jade giant is not really their enemy and refuse Loki's invitation to finish him off. Angered by his failure, Loki casts the Hulk into a bottomless pit.
Reprints
Keywords
Asgard; Rainbow Bridge

Genre
Superhelden (superhero)
Characters
Hulk (Origin); GUESTS: Odin; Oldar; Warriors Three--Hogun; Fandral; Volstagg; VILLAINS: Enchantress; Executioner; Trolls; CAMEO FLASHBACK: Igor; Rick Jones; Thunderbolt Ross; Thor; Silver Surfer
Synopsis
Bruce Banner is falling down a bottomless pit back to Midgard when the Enchantress plucks him back. The Warriors Three consult Oldar the Oracle and find out the origins of the Hulk. Banner transforms into the Hulk which enrages the Executioner who has fought the jade giant before. Leaving the Hulk behind, the evil duo lead an army of trolls against Asgard and the Hulk arrives on the scene just in time to lend a hand in the victory of Odin's forces. Even though he has proven himself an ally, the Hulk still manages to tick the All-Father off so an enraged Odin sends him back to earth.
Reprints
Keywords
Asgard

Genre
Superhelden (superhero)
Characters
Hulk; GUESTS: Thunderbolt Ross; Glenn Talbot; Rick Jones; Betty Ross; VILLAINS: The Space Parasite [Randau](1st and Death); CAMEO FLASHBACK: Thing
Synopsis
Watching a TV show about the menace of the Hulk, the evil Space Parasite decides to make a pit-stop on earth to suck up all of the jade giant's powers to fuel his plans for interplanetary conquest. The Hulk battles the Parasite but the fight is ultimately determined by members of the Parasite's home planet who recognize him as a menace and blow up his space ship. The Hulk is gassed by New York's finest and is captured.
Reprints
Keywords
elevated subway; New York City; tear gas; teleportation; Times Square; Yankee Stadium

Genre
Superhelden (superhero)
Characters
Hulk; GUESTS: Thunderbolt Ross; Glenn Talbot; Betty Ross; Rick Jones; VILLAINS: Rhino; Igor; Georgi
Synopsis
The Rhino, finally out of prison after his last battle with Spider-Man, is contacted by the men who originally gave him his costume and they offer to give him a new suit with more power. Banner is in prison at Sing-Sing and as Ross is transferring him to a new location, the Rhino attacks and battle ensues. The Hulk is groggy from being sedated but still manages to beat the Rhino to (apparent) death. Looking for love in all the wrong places, the Hulk grabs Betty from her father and takes off.
Reprints
Keywords
gamma rays; JFK Airport; Sing-Sing Prison

Genre
Superhelden (superhero)
Characters
Hulk; GUESTS: Mr. Fantastic; Betty Ross; Thunderbolt Ross; Glenn Talbot; Rick Jones; VILLAIN: Missing Link (1st; Origin); CAMEO: Mao Tse-Tung (Photo)
Synopsis
Prowling New York with Betty in his clutches, the Hulk transforms back into Banner and is shot in the leg by thugs. The product of a nuclear test conducted by the U.S. and captured by the Chinese, the Missing Link is brought to New York and unleashed. He crosses paths with the wounded Hulk and the two battle. Mr. Fantastic creates a Hulk-stopping weapon designed by Banner and Talbot takes the machine to hunt for him. Not realizing that he is fighting a dangerous foe, Talbot shoots the Hulk with the weapon turning him back into Banner just as the Missing Link begins another assault.
Reprints
Keywords
China; New York City; radiation; subway; Wall Street

Genre
Superhelden (superhero)
Characters
Hulk; General Thunderbolt Ross; Betty Ross; Glenn Talbot; Rick Jones; Nick Fury; Dum Dum Dugan; Gabriel Jones; Missing Link (villain, death); Yuri Brevlov (villain)
Synopsis
Banner once again becomes the Hulk as the battle with the Missing Link continues. Fury and SHIELD move in to help in capturing them. During the fight, a Russian ship captures them. The Russians do tests on the Missing Link but the Hulk escapes his captivity and causes mayhem. The Hulk makes it back to terra firma just as the Missing Link finally overloads on radiation and explodes. Yuri and his men escape their doomed ship in a smaller saucer and even though the Hulk has just saved a small Russian boy from a burning house, Brevlov is pressured by his men to finish off the monster.
Reprints

Genre
Superhelden (superhero)
Characters
Hulk; GUESTS: Nick Fury; Dum Dum Dugan; Gabriel Jones; VILLAINS: Mandarin; Mandarin Robot; Yuri Brevlov
Synopsis
Just as Yuri and his men are about to decimate the Hulk, Nick Fury shows up to take his Russian foe down. The Mandarin zaps the Hulk to his compound and puts him through his paces to see if the jade giant would make a worthy ally in his bid to take over the world.
Reprints
Keywords
China; communists; Gobi Desert; quicksand; robot; teleportation

Genre
Superhelden (superhero)
Characters
Hulk; Inhumans [Black Bolt; Gorgon; Lockjaw]; Maximus the Mad (villain); Falcona (villain); Leonus (villain); Aiero (villain); Timberius (villain); Stallior (villain); Nebulo (villain)
Synopsis
Black Bolt banishes six rebel Inhumans to the un-place for treason. Lockjaw takes them there but on his way back to the Great Refuge, he tangles with the Hulk whom he also takes to the un-place. Under the guidance of Maximus, the Hulk joins the evil Inhumans and they make their way back to remove Black Bolt from his throne. Maximus uses the Hulk to gain access to an ancient power source but even this is not enough to dethrone the silent monarch of the Inhumans. Realizing that the Hulk is an ally, Black Bolt offers to let the Hulk live in peace with the Inhumans but Hulk declines the offer.
Reprints
Keywords
The Great Refuge