Distributed to newsstands in April 1961. This issue includes 10 pages of paid advertisements (pages 2, 9, 15, 19, 25, 27, 33-36 of comic including inside front cover, inside back cover and back cover); pages of comic not numbered.
On sale date as given in the copyright application as listed in the Catalog of Copyright Entries, Periodicals, January-June 1961, page 148, registration number B902925.

The Green Thing! (Table of Contents) 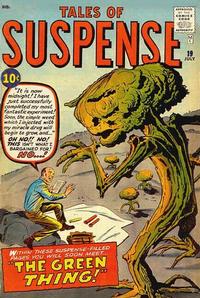 Job Number
V-216
First Line of Dialogue or Text
Ever since it happened, I've been as nervous--as fearful--as a condemned man!
Genre
science fiction
Characters
The Green Thing; Ignatius Rex
Synopsis
A botanist invents a serum to magnify the latent intelligence of plants. He tested it on a remote island, but the plant was evil and wanted to conquer the world. The scientist ran from the plant and used the serum on a more advanced plant, which was benevolent and stopped the evil plant.
Reprints

Job Number
G-377
First Line of Dialogue or Text
Lester counted up all his cards and gave the number to the scorekeeper.
Genre
fantasy-supernatural
Characters
Lester Ford; Marie Ford; Lady Luck
Synopsis
A businessman doesn’t believe in luck, but several beneficial encounters with an old lady change his mind.
Reprints

The Haunted Paper! (Table of Contents: 4)

Job Number
V-213
First Line of Dialogue or Text
Nick Rover was always just one step ahead of the law!
Genre
fantasy-supernatural
Characters
Nick Rover [Mr. Nicholas]; Olef
Synopsis
A criminal skips town and sets up a newspaper as a front. When his typesetter changes the headlines from what they should read into what actually happens in the near future, he realizes he's got a goldmine, but the typesetter refuses to tell him how he can accurately predict the future. The criminal threatens to fire and blacklist the typesetter if he doesn't come clean, and the next headline he sets tells of an accident happening to the newspaper owner. Panicked, he turns himself in to the police so that he will be safe in jail, which is what the typesetter wanted all along.
Reprints

The Coming of Maaboo! (Table of Contents: 5)

Job Number
V-217
First Line of Dialogue or Text
Some people call me a soldier of fortune, others more rightly figure me for...
Genre
science fiction
Characters
Charlie Wilkes; Maaboo
Synopsis
A mercenary hears of a tribe that hoards gold while waiting for the return of a legendary alien. The mercenary poses as the alien and steals the gold, but he is abducted by the real alien.
Reprints
Keywords
Burma