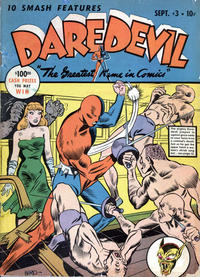 [Daredevil The Greatest Name in Comics Presents] (Table of Contents: 1)

The TOC lists Charles Biro and Bob Wood as Editors, and gives the ten main features found in the book with very brief synopses, as well announcing a Big $100.00 Cash Prize Contest.

The Case of the Killer Who Hated Death!! (Table of Contents: 2)

Genre
superhero
Characters
Daredevil [Bart Hill]; Tonis Saunders; Joan Cramm (friend of Tonia's); Judge Reed (death); Chief of Police Scott (death); Gerald Parks (villain, Tonia's butler)
Synopsis
Daredevil must battle a person who seems ordinary during the day, but who suddenly seems to take on a Dr. Jekyll and Mr. Hyde personality at night, becoming a vicious, monsterous killer! His first order of business is to stop the murderer of several prominent people, which, to his surprise, seems to be his girl friend, Tonia Saunders!
Reprints
Keywords
Daily Times; The Post

The last panel gives the title of next issue's story: "The Sport of Death!".

The Suicide Circle (Table of Contents: 3)

Genre
adventure
Characters
13 [Harold Higgins] (introduction, origin); Hal Higgins (Harold's brother, death); Harold's un-named fiancee (death); Captain Higgins (Harold's father, death); Margy Higgins (Harold's sister, death); Larry Miller; Ah Ling (villain); Clyde Roussos (villain, Editor of The Herald); Fong (villain)
Synopsis
A reporter for The Herald is first on the 13th day of the month because of his editor's belief that the young man's views on a story are all wrong. In the coming months, Harold suffers more tragedies, all occuring on the 13th day of the month. Taking that as an omen, Higgins adopts the costume and identity of 13, hoping to still solve the news story he was fired over and to break his "13" jinx forever.
Reprints
Keywords
Hollywood Snoops; The Herald

The Battle of the Centuries (Table of Contents: 5)

Genre
superhero
Characters
The Claw (villain); Bill Hopkins (engineer); Dick Hopkins (Bill's brother, soldier); Chinese aides to the Claw (villains, some die)
Synopsis
Having hypnotized the 2000 soldiers he had captured to serve as an Army to help him seize control of America, the Claw faces the challenge of an opposing force, led by Bill Hopkins, out to rescue his brother.
Reprints

The masthead reads "Will the Claw Rule America?".

First Line of Dialogue or Text
Above the bombed city of London, a lone plane circles --
Genre
adventure
Characters
London [Marc Holmes]; Hector Pinchley (villain); Herr Shlutz (villain); Weazel (villain, death); Morries (villain, candy shop owner); Hesst (villain, master of espionage)
Synopsis
Surveying the damage to London after the attacks made on it by the enemy, Holmes promises that the spy ring operating in the city will be captured within 48 hours. The leader of the spy ring has other ideas about that, co-ordinating an enemy air attack and eliminating the thorn in his side: Marc Holmes, better known as London.
Reprints
Keywords
London Times; Morries Candy Shop

The arrival of Rudolf Hess, Deputy Führer, in England in 1941 is fictionalized here.

First Line of Dialogue or Text
Imagine! The army officials have...
Genre
adventure
Characters
Pat Patriot [Patricia Patrios]; un-named U.S. Army Major; un-named saboteurs (villains, one dies)
Synopsis
Because of her capture of saboteurs at the airplane factory, Pat is asked to attend a big celebration at the Army camp. The major in charge tells her that things are not right in the camp: gun sights have been damaged, food has been contaminated, and a flu epidemic has spread throughout the camp. Pat volunteers to fly to a medical station to secure flu vaccine, and does, but she is attacked by the sabotage ring in the process.
Reprints

Script credits suggested by Bails' Who's Who.

I Saw Daredevil Battle The Claw (Table of Contents: 8)

Genre
superhero
Characters
Daredevil [Bart Hill]; The Claw (villain)
Synopsis
The Claw announces to people near Radio City Music Hall that they must bow down to him and acknowledge him as ruler in the city or suffer the consequences. Fortunately, Daredevil is on the scene in his civilian identity and switches quickly into his fighting garb and takes on the Claw.
Reprints
Keywords
Central Park; Central Savings Bank; Playmore Room

The last part of page 3 is the illustrated feature: "Daredevil's Punch-of-the-Month," and this issue Daredevil, who is pictured, describes "The Right Uppercut": what it is and how to effectively deliver it to an opponent.

Genre
superhero
Characters
The Bronze Terror [Jeff Dixon]; Ed (Jeff's partner at the law firm); Lilly; Lilly's un-named father; Judge Hawks (villain); "Dirk" Fleming (villain, head of a construction company); Slim (villain); Mike (villain)
Synopsis
The evil Judge Hawks and Dirk Fleming have discovered some old blue laws that allow them to use Indians as slave laborers on a road construction project, but the Bronze Terror has other ideas, especially when Dirk takes a liking to Lilly's father and wants to marry her.
Reprints
Keywords
Redfield

First Line of Dialogue or Text
Summer 1941...the Hale football squad gathered together for summer practice [...]
Genre
adventure
Characters
Dash Dillon; "Smokey" Cole (Army football player); Wilson (Hale football player); Mazie (villain); two un-named city gamblers (villains)
Synopsis
Two unethical gamblers decide that the only way for Hale College to lose the game against Army is to get Hale's star player, Dash Dillon, out of the way, and Mazie is the one to do it. Unfortunately, Mazie kidnaps the wrong player.
Reprints
Keywords
Hale College