Signatures on gravestones. Letters credit from Todd Klein via http://kleinletters.com/. 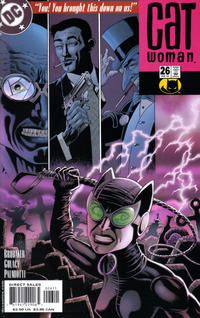 A Knife in the Dark (Table of Contents: 1)

Slam heads to a cemetery to make the money drop. When they see the kidnapped girl, Selina moves to take all the henchmen out. Zeiss watches from a distance to learn how Catwoman moves and fights. Slam spots him and is stabbed by Zeiss through his Kevlar jacket.
Reprints