Cover is also page 1 of this issue's Dan Dare story. 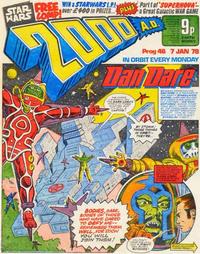 Time Was (Table of Contents: 2)

Advert on bottom of last page.

[The Lab of the Diabolical Dr. Lu-Ney] (Table of Contents: 3)

Bonjo from beyond the Stars / comic story / 0.25 page (report information)

House adverts on rest of page consisting of a 1/4 page "Visisble Man starts next issue" and a 1/2 page for "Top soccer calendar 1978 souvenir Part 1 in the weekly Tiger comic".

Genre
science fiction; spy
Characters
John Probe [MACH 1]; MACH 0; Denis Sharpe
Synopsis
Probe manages to placate the child-like Mach 0, and prevents Sharpe's men from killing him. Sharpe promises he will get the scientists to try and reverse the procedure and turn Zero back to normal. But he lies and Zero is murdered once his ambulance is out of sight. Probe finds out and swears vengeance on Sharpe, who has meanwhile gone on vacation.
Reprints

Genre
detective-mystery; science fiction
Characters
Luna City One Judges [Judge-Marshal Dredd (featured); Judge Tex (guest)]; Walter the Wobot (guest); C.W. Moonie
Synopsis
Dredd and Walter arrive at C.W. Moonies ranch on Luna 1 intent on arresting him, but have to survive a perilous trip through Moonies Museum Of The Moon before they can lay hands on him.
Reprints

First 2 pages colour only and starts at the centerspread.

Deadlier Than the Male (Table of Contents: 8)

Genre
science fiction
Characters
Bill Savage; Rosa Volgaska; Prince John
Synopsis
Savage and his crew outwit Volgan attempts to capture them as they try to smuggle Prince John out of the country.
Reprints

Genre
science fiction; sport
Characters
Giant; Zack Harper; Moody; Junk; Clay; Nat Cullen
Synopsis
The Harlem Hellcats are trapped in the Crystal Maze Amusement Arcade as they chase Cullen. The holograms turn real and threaten to kill them, but a lucky hit from Moody knocks the power out and they escape, only to be confronted by Novelty Androids programmed to kill.
Reprints

First in a series of six. Six game-card pictures of Space Ships with their vital statistics. Game modelled on Ace Trumps. Printed Landscape.