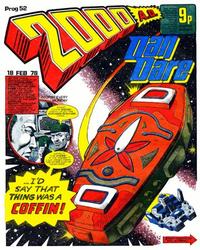 Genre
science fiction
Characters
Dan Dare; Hitman; Bear
Synopsis
A floating coffin is retrieved from space, which upon opening, is found to contain an exact copy of Dare. The copy escapes and convinces the crew that he is the real Dan Dare.
Reprints

Genre
science fiction
Characters
Frank Hart; Doctor Burnard
Synopsis
Hart, desperate for an antidote to his condition (ie. "visibility'- his transparent skin) agrees to go into space so the boffins can see the effect it has on the body's organs. Once in space he realises that they have no intention of giving him the antidote, so he refuses to come back.
Reprints

[The Face-Change Crimes] (Table of Contents: 4)

Tooley gang choose to disguise themselves as 20th century comedians. They appear first as Charlie Chaplin, Laurel and Hardy, then later as the Marx Brothers. Colour on first two pages only.