Distributed to newsstands in May 1961. This issue includes 10 pages of paid advertisements (pages 2, 9, 15, 19, 25, 27, 33-36 of comic including inside front cover, inside back cover and back cover); pages of comic not numbered.
On sale date as given in the copyright application as listed in the Catalog of Copyright Entries, Periodicals, January-June 1961, page 148, registration number B903153. 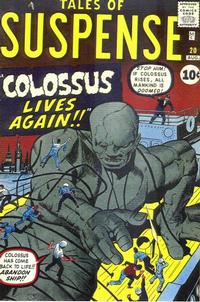 Job Number
V-250
First Line of Dialogue or Text
Introduction: The Colossus, world's largest and strongest statue, was built by the iron curtain nations as a symbol of...
Genre
science fiction
Characters
Colossus [later called "It, the Living Colossus"]; Crab-Creatures of Cancrius III; Judy; Frank; Charlie; Ben
Synopsis
The crab-creatures of Cancrius III come back to try to take over the earth and begin by taking control of Colossus again. Bob O'Bryan, a scenery designer, comes up with the idea of creating a plaster of paris creature to trick the crab-creatures into taking over. When the crab-creatures foolishly take it over Bob blows it up, destroying them.
Reprints
Keywords
Cancrius III (planet)

Job Number
G-931
First Line of Dialogue or Text
There was trouble in the air.
Genre
science fiction
Characters
Chuck; Harry Davis; Dr. Ramsay; Kennedy
Synopsis
The weather reporter at a newspaper realizes that the weather is being manipulated somehow in an effort to destroy Earth's crops and helps the government stop the attack.
Reprints

The Rocking Horse (Table of Contents: 4)

Job Number
V-251
First Line of Dialogue or Text
The year was 1961... A year when the rich nations of Earth offered help to...
Genre
drama
Characters
Hamim; Hamim's mother; Hamim's father
Synopsis
A lame boy in a poor house asks for a rocking horse from charity, enraging his parents. When their house is destroyed in an earthquake the horse saves the boy, showing the value of love.
Reprints

The Bomb (Table of Contents: 5)

Job Number
V-249
First Line of Dialogue or Text
Behold!! A strange object, making a sudden, dramatic appearance as it plunges earthward!
Genre
science fiction
Synopsis
A threatening object that appears to be a bomb drops from the sky and lands in New York city. The object even emits ticking sounds that lead people to believe they are in imminent danger and so the city the evacuated. The military cordons off the object and just waits for its detonation. Eventually the ticking stops and it rises into the air and disappears. It was recalled to its planet of origin because no living thing touched it in response to its signals, and its makers assume Earth is barren of life, so they send their gift package off to another world.
Reprints
Keywords
Manhattan; Times Square