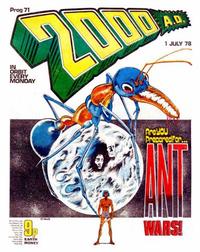 Genre
drama; science fiction
Synopsis
An insecticide is tested on an anthill in the Brazilian jungle with devastating consequences.
Reprints

This strip debuted this issue

The Cursed Earth Chapter 11: Battle Of The Burger Barons (Table of Contents: 3)

This is one of very few vintage Judge Dredd stories not to have been reprinted for a long time, with the owners of the trademarked characters used not happy and only agreeing not to take any further action after an agreement that the stories would never see print again. Legal letters were also sent to webpages presenting the story online.