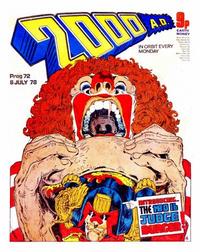 This is one of very few vintage Judge Dredd stories not to have been reprinted for a long time, with the owners of the trademarked characters used not happy and only agreeing not to take any further action after an agreement that the stories would never see print again. Legal letters were also sent to webpages presenting the story online.

Genre
science fiction; sport
Characters
John 'Giant' Clay; Louis The Brain; Zack: Moody Blu; Slim; The Syndicate
Synopsis
The Hellcats have to face off against the Wolves of Death with Giant's life at stake.
Reprints