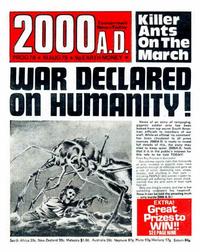 Genre
science fiction
Characters
Sam Slade [Robo-Hunter]; Jim Kidd; QT
Synopsis
Sam Slade and Jim Kidd are captured by robots and find out what happened to all the humans.
Reprints

Main part of artwork is by Ferrer, characters of QT and Jim Kidd as a baby redrawn by Ian Gibson when he took over art chores for the series after the first three episodes had been written and drawn but not published.

Nothing on Earth! (Table of Contents: 3)

Genre
science fiction
Synopsis
The army destroys an enemy spaceship filled with revolting octopus creatures but spares one with aliens that look like teddy bears.
Reprints

Synopsis
Part of the board for the Cursed Earth game.

Only the first two pages are in colour. This is one of very few vintage Judge Dredd stories not to have been reprinted for a long time, with the owners of the trademarked characters used not happy and only agreeing not to take any further action after an agreement that the stories would never see print again. Legal letters were also sent to webpages presenting the story online.

Captain Staedtler and His Cosmic Colours (Table of Contents: 7) (Expand) /

You Too Can Be a Guardian of the Skies (Table of Contents: 9) (Expand) /

Back cover of comic