Also includes pictures of a giant Judge Dredd poster and a panel from Dan Dare. 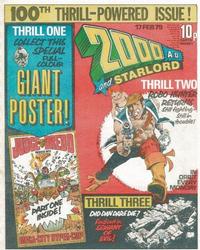 One quarter of a giant poster of Judge Dredd as Mega-City Hyper-Cop.

Page count includes a one page prologue summing up previous issues with panels from them. First page of story starts with "This is S J I, you guys. He's been on Earth and seen people..."

This issue starts a new story.

Last page is on back cover and is in colour.