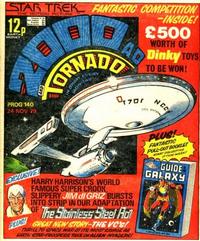 Part 1 of a 12 part adaptation of Harry Harrison's 1961 novel The Stainless Steel Rat.

Night of the Carnivore, Part 9 (Table of Contents: 6)

Where the Stainless Steel Rat Began (Table of Contents: 7)

Text article by Harry Harrison detailing how he came up with the story of The Stainless Steel Rat.

Starlord's Guide To The Galaxy (Table of Contents: 9)

Pull out guide that assembles week by week into a hand book of the alien races that inhabit the 2000 AD universe.