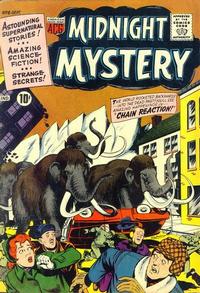 Clem Never Does Anything Big! (Table of Contents: 1)

Genre
adventure; science fiction
Characters
Shane O'Shea (host); Ogden Whitney (host); Clem; Arabella (Clem's girl); Reuben (Clem's dog); Rosalie (a skunk); Sweet Stuff Simpkins (Arabella's eventual husband); the Interplanetary Gypsies [Verstipix; others un-named] (villains)
Synopsis
A pair of aliens, driven from other planets because they cannot tolerate other worlds' inhabitants, approach the Earth. They land in a place called Hog Hollow, and capture young Clem, putting him through a series of tests to see if the people of the planet are dangerous. Clem believes the aliens to be revenue men from the government...the aliens, however, soon discover "Kentucky Lightning," skunks, and angry hornets, which drives them back into space, warning their home planet never to attempt an invasion of this planet.
Keywords
Hog Hollow Kentucky; Rocket 378

Whitney is credited for drawing this story on the splash page.

The White Apeman! (Table of Contents: 4)

The Gladiator! (Table of Contents: 5)