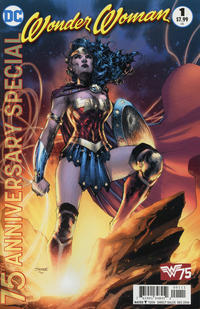 Gives Us Strength (Table of Contents: 1)

The Wonder Woman Covers of Brian Bolland (Table of Contents: 4)

Reprints four of the Wonder Woman editors' favorite previously published Brian Bolland covers (reprinted at a quarter of a page), plus 3 pencil sketches by Bolland for covers that were never published (printed as a full page each).

One Side Alone (Table of Contents: 6)

Presented as an article for the Daily Planet Sunday Magazine with pictures of Wonder Woman.

There is a Layout credit for Lori Jackson.

In the interview, Diana references recently helping a friend in Bwunda, Africa and coming to the realization that some things that she had believed about herself were not true. These are references to events in "The Lies" storyline that ran in Wonder Woman (2016 series) #1-11 (odd numbered issues).

The Age of Wonder (Table of Contents: 9)

The Legend of Wonder Woman (Table of Contents: 12)