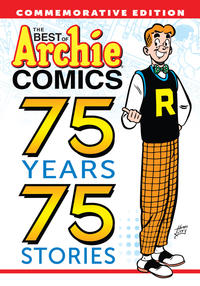 First Line of Dialogue or Text
Just a matter of skill, that's all!
Genre
humor; teen
Characters
Archie Andrews [Archibald Andrews; Chick]; Betty Cooper; Sam Cooper; Mildred Cooper; Fred Andrews; Edna Andrews; Gramps Andrews; Jughead Jones [Forsythe P. Jones] (introduction for all)
Synopsis
Archie meets Betty, a girl who has just moved into the neighborhood. He shows off for her, claiming he can do anything. At a carnival that weekend, Betty meets a man who needs a tight rope walker. Betty, remembering that Archie can do anything, volunteers Archie with humorous results.
Reprints

Only Fred Andrews is identified by name in this story. The other parents' names would change over the years.
Archie and Betty are a few years younger than usual.

Pancakes In a Blackout (Table of Contents: 2)

Genre
humor; teen
Characters
Archie Andrews; Fred Andrews; Mary Andrews
Synopsis
Archie is cooking pancakes when the air raid siren goes off -- he has to turn off all the lights in the house and keep his pancakes from burning at the same time!
Reprints

Genre
humor; teen
Characters
Archie Andrews; Gabby (introduction); Veronica Lodge; Betty Cooper; Jughead Jones; Fred Andrews; Pop Tate (introduction)
Synopsis
Archie gets a cheque for $50 from his grandfather, makes a list of what he wants to buy for his friends, but most of the money is gone by the time he buys the gifts.
Reprints

Signed in the last panel. This story contains the first appearances of Gabby, the town blabbermouth, and Pop Tate, the owner of Pop's Chocklit Shop. In this story, his restaurant is called Tate's and he is a skinny, older man with gray hair and a mustache. Also, the Shorten Special on page 4 is a reference to MLJ editor Harry Shorten.