Vengeance of the Dust Devil! (Table of Contents)

The cover scene is redrawn on page 6 of the story, panel #1. 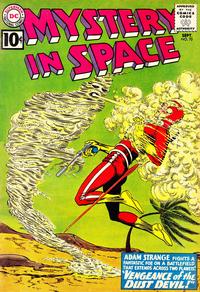 Record Your Voice at Home (Table of Contents: 2) (Expand) /

Vengeance of the Dust Devil! (Table of Contents: 3)

Genre
adventure; science fiction
Characters
Adam Strange; Alanna; Jakarta (a dust devil, name revealed in this story, last seen in Mystery in Space #68, next seen in Mystery in Space #84); unnamed citizens of Melbourne, Australia; unnamed citizens of Ranagar; a female hobby shop clerk in Melbourne
Synopsis
Adam Strange intercepts the Zeta Beam at Lake Makadi, Tanganyica, Africa and returns to Rann, unknowingly carrying Jakarta, the last surviving Dust Devil, who had hidden in Adam's holster on the planet Rhynthar (see Mystery in Space #68). Seeking revenge, Jakarta attacks Ranangar. The Zeta radiation wears off and returns the pair to Earth, which the dust devil also plans to conquer, near Melbourne, Australia. Adam discovers that static electricity can freeze Jakarta, traps him with a Wimshurst Machine (which discharges electricity) and then turns the Dust Devil over to Australian authorities.
Reprints

Adam is given a replacement jet-rocket for the one he lost in Mystery in Space #69. It's revealed that Adam has a secret hideaway in the Australian Outback. Writer Fox took the name Jakarta from the capital and largest city of Indonesia. Sardath does not appear in this story.

The Right to Be Different! (Table of Contents: 5)

See the Many Fantastic Faces of Superman... (Table of Contents: 6) (Expand) /

The Billion-Year Evolution! (Table of Contents: 8)

Genre
science fiction
Characters
Doctor Fred Gibson; his fiance Elsa; archeologist Phil Travis; ancient Jovian scientist Halfar Kal
Synopsis
In 2178, Doctor Fred Gibson is on Jupiter searching for his fiance Elsa. His romantic rival, archaeologist Phil Travis, finds her first but lacks the medical knowledge to treat her properly. Gibson, however, finds ancient Jovian technology that reveals its history: scientist Halfar Kal invented a "Droga Ray" that evolved the Jovians into pure energy, allowing them to travel throughout the galaxy. Gibson uses the ray on himself and as an invisible energy being helps Travis save Elsa. Travis returns to Earth, but the grateful Elsa opts to stay with Gibson, who used the ray to return to normal.
Reprints

The Inside Stories of Batman and Robin's Top Secrets (Table of Contents: 10) (Expand) /

The Bravest Man in Space! (Table of Contents: 15)

Genre
science fiction
Characters
Space adventurer Jon Drum from the planet Ildaric; his best friend, Lars Korn; reporter Harl Vincent; dignitaries in in the Solar Hall on Earthport Los Frisco; warrior Klinn crewmen; cloud creatues on the planet Tantamar; silicon creatures from Alphard; a trapped miner
Synopsis
Heroic Jon Drum defeats cloud creatures to free the Illkanov; he bests silicon creatures from Alphard; he escapes from a magnetic maelstrom; and he saves a miner on Zeta Virgo's fifth planet. He is about to be honored when reporter Harl Vincent claims he saw an android duplicate of Drum performing at least one of Drum's adventures. Drum refuses to defend himself and leaves, but is captured by the Klinn. But it's all a ruse so that Drum can penetrate the Dissimatter barrier protecting the Klinn home world, use the ancient weapon he found to defeat them, and rescue several captured scientists.
Reprints

Sid Greene's trademark caricature of editor Julius Scwartz appears on page 3. Writer Fox uses the name of several bright stars for locations in this story, most of which have Arabic roots (Aldebaran, Alphard, Zeta Virgo, Sheratan). Fox likely took Korn's name from a small city in Russia. The real life Harl Vincent (1893 - 1968) was a pulp SF writer who wrote for Argosy, Astounding and many others, including Julius Schwartz's fanzine, Fantasy Magazine, in 1935.

Guaranteed to Make You Smile… (Table of Contents: 16) (Expand) /