Mera in Charge! (Table of Contents) 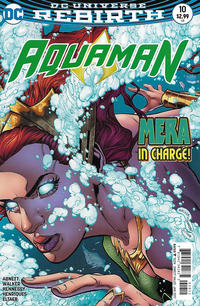 Genre
superhero
Characters
Mera; The Widowhood [Reverend Mother Cetea; Seer-Sister Nerid; Sister Balene; Sister Elasmar]; Aquaman [Arthur Curry] (in prophecy vision); the Fatal Queen [Mera?] (in prophecy vision); Lieutenant Joanna Stubbs (British Royal Navy); unnamed waiter; Broadside (agent of N.E.M.O.); Black Jack (agent of N.E.M.O.)
Synopsis
The Widowhood's Seer has a prophecy of a Fatal Queen who will trigger the Deluge which will end both Atlantis and the surface world. Believing the Fatal Queen to be Mera, the Widowhood refuses to sanction her marriage to Arthur to prevent the Deluge. Mera starts to be wonder if she should not marry Arthur for the same reasons. Mera then responds to a message from Lt. Joanna Stubbs, who reveals to her that N.E.M.O. is behind the attempts to provoke war between Atlantis and the US. Their meeting is interrupted by Broadside, a N.E.M.O. agent who wants to kill them both.
Reprints

Aquaman does not appear in this story except for the prophecy vision of the future where he dies.

The Deluge is a prophecy of a cataclysmic flood that will destroy both the Surface World and Atlantis. The Atlantean rebel group named "The Deluge" named themselves after this prophecy believing that only the surface world will be destroyed by the flood. The prophecy is said to be triggered by a "Fatal Queen" of Xebel blood after the death of the king. The Widowhood believes that Mera is destined to be this Fatal Queen.