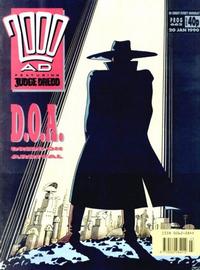 Issue #663 has an "Important Thrag-Note": "A printing error last prog (662)" (i.e this one), "caused an old Nerve Centre to appear in place of the planned Slaine title page..." and provides a recap of the story so far.

The story leads in to the following story, Judge Dredd: Tale of the Dead Man Part One.

Continues from the previous story, The Dead Man Part 13.