Distributed to newsstands in June 1961. This issue includes 10 pages of paid advertisements (pages 2, 9, 15, 19, 25, 27, 33-36 of comic including inside front cover, inside back cover and back cover); pages of comic not numbered.
On sale date as given in the copyright application as listed in the Catalog of Copyright Entries, Periodicals, January-June 1961, page 148, registration number B907451.

This Is...Klagg! (Table of Contents)

The unaltered cover was published in the British reprint Spellbound # 40. In this version Klagg is almost completely covered in ink and made to look more like the interior version, with smoke added to the upper left corner. Info per Nick Caputo, May 2016. 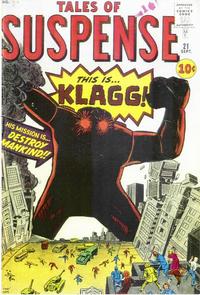 Job Number
V-289
First Line of Dialogue or Text
Last year in a radar station behind the Iron Curtain, an unidentified flying object was spotted!
Genre
science fiction
Characters
Klagg; Philip; Clair; Mrs. Jones; John
Synopsis
Klagg, an alien who visits Earth, becomes so upset upon learning humanity still wages war that he declares war upon the nations of the Earth. The hero of the story convinces communist agents to pool their forces with the democracies in an effort to present a united front against Klagg. The effort is successful because the fact the various nations were able to set aside their differences and band together convinces Klagg to give up his campaign of destruction and leave Earth.
Reprints
Keywords
Lumus Centorius (planet)

Job Number
K-18
First Line of Dialogue or Text
Most people agreed that he was a backward baby.
Genre
humor
Characters
Oston Trams; Mrs. Trams; Laer Trams; Mike Ross
Synopsis
An extraordiinary child excels at sports and school, but does it all backwards.
Reprints

Whose Face Is in the Mirror? (Table of Contents: 4)

Job Number
V-288
First Line of Dialogue or Text
This particular day started off just like any other for our hero, Joe Kane, office worker...
Genre
horror-suspense
Characters
Joe Kane
Synopsis
A man wakes up in the morning and sees a stranger's face in the mirror and then it shatters. He tries looking into another mirror and the same thing happens. He looks into a full length mirror and it happens a third time. He makes his way to work, avoiding mirrors, until he stands before the elevator. When the door opens, the man whose face he has seen is standing inside producing a terror-stricken reaction. Our hero runs away, and the puzzled man leaves the elevator which cable snaps, sending it plunging down the shaft to destruction.
Reprints

Job Number
V-290
First Line of Dialogue or Text
Hey, Charlie!
Genre
science fiction
Characters
Walter Phelps; Charlie; Marcus
Synopsis
A man invents a time machine to travel back to the Roman Empire of 25 A.D. and set himself up as king, but all the present day devices he has brought back with him to prove his claims do not work without electricity, fuel, and broadcasting stations.
Reprints
Keywords
Rome; time travel

Narrated in the first person. This story is a retelling of "Trapped in Yesterday!" drawn by Carl Burgos in Tales of Suspense #2 (March 1959). Story is pages 28-32 of comic (pages of story numbered 1 to 5).