A Stab in the Dark (Table of Contents) 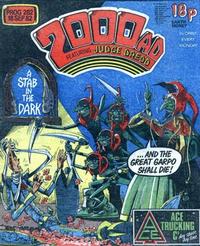 Warren Ellis of Benfleet, Essex praises the Judge Dredd Apocalypse War storyline ("carved of the stuff of which legends are made"). John Welding would go on to produce his own well-received self-published title in the 1990s.

The Marauders, Part 1 (Table of Contents: 5)

Genre
science fiction; war
Characters
Rogue Trooper (featured)
Synopsis
Rogue meets the Marauders, a group of deserters from both sides of the war who've united to serve their own ends.
Reprints

Correctly or otherwise, it is widely assumed that A. Ridgway is a pseudonym for main series writer Tom Tully. This is the final episode of Mean Arena in its original incarnation.

Genre
humour; science fiction
Characters
Rorschach Skubbs
Synopsis
In 2250 Earth has colonised the Sun, and one of the colonists has a problem: he's just murdered his wife and needs to dispose of her corpse.
Reprints

Only the final story page, on the back cover, is in colour.