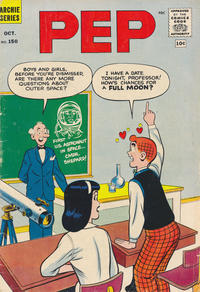 Archie the Archer (Table of Contents: 1)

Say It With Flowers (Table of Contents: 3)

The World of Jughead Is Out of This World! (Table of Contents: 4) (Expand) /

Genre
superhero
Characters
The Jaguar [Ralph Hardy]; Great Mahavo (medicine man)
Synopsis
While exploring Indian relics in a national park, Ralph Hardy stumbles across a geyser of gas. When he awakens he finds himself in the past. A village of Indians is menaced by two metal monsters than can fire bolts of electricity and the Jaguar has to find a way to defeat them.
Keywords
aliens; buffalo; electricity; gas; geyser; Indian relics; time travel; totem pole

First Line of Dialogue or Text
It's the Greatest!
Characters
Li'l Jinx (cameo)

List of 44 persons (ages 7 to 15) desiring pen pals. In addition to the United States, countries include Canada, Australia, Guam, and the Philippines.

War and Peace (Table of Contents: 10)