Dread the Man! (Table of Contents) 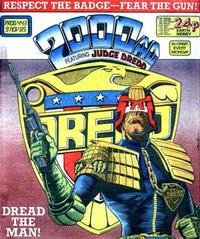 Matt Timson would go on to do art for Image/Top Cow.

Nemesis the Warlock, Book V: The Vengeance of Thoth, Part 9 (Table of Contents: 2)

No dialogue on first page, first line speech bubble is at the top of the second page.

Death of a Politician (Table of Contents: 4)

Genre
science fiction
Characters
Tharg the Mighty
Synopsis
Tharg has the Psmith art droid sent to the crusher but changes his mind at the last minute when he needs someone to draw "Bad City Blue" by Alan Grant.

The first installment of "Bad City Blue" ended up appearing in 2000 AD prog#468, approximately 6 months after this story appeared.