Tomb of Terror! (Table of Contents) 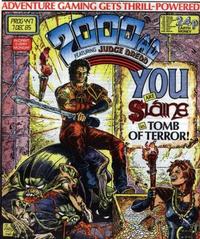 You Are Sláine - Tomb of Terror Part 1 (Table of Contents: 3)

Genre
fantasy-supernatural; sword and sorcery
Characters
Sláine
Synopsis
A "Fighting Fantasy" type game where you control the actions of the hero through choice and die rolls.

Last chapter of this storyline. Note in last panel says Mean Team will be "back in the spring".

The Uglybug Ball (Table of Contents: 5)

First Line of Dialogue or Text
We'll land you on the south coast of Norway...
Genre
science fiction
Characters
Johnny Alpha
Synopsis
Johnny Alpha travels back to the Viking era to track down Max Bubba and his gang.
Keywords
Norway; time travel; Vikings

No credits given in issue. All credits assumed to be the same as other chapters in this storyline.

He is the Law and You'd Better Believe It! (Table of Contents: 8)

Other text on this back cover includes "The History of Justice" and "Punks Rule: Prog 110".