This variant cover connects to the following covers to complete a larger continuous image: 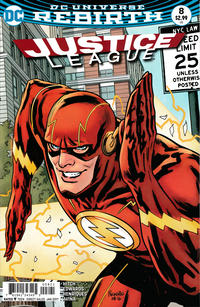 Outbreak Part One (Table of Contents: 1)

Genre
superhero
Characters
Justice League [Cyborg [Victor Stone]; Batman [Bruce Wayne]; Wonder Woman [Diana of Themyscira]; The Flash [Barry Allen]; Aquaman [Arthur Curry]; Green Lantern [Simon Baz]]; Alfred Pennyworth; Bobby Palmer; Lily Palmer; James Palmer (on TV screen, husband of Diane Palmer, father of Bobby and Lily)
Synopsis
As the world mourns for Diane Palmer, the only fatality in the attack by the Kindred, a malicious computer program infiltrates the Batcave computer and Cyborg's and the Watchtower's systems. As a result, Batman's equipment turns against Bruce and Alfred, and the Watchtower begins a descent to Earth on a collision course with San Francisco with Victor unable to stop it.
Reprints

Diane Palmer's husband's name is revealed as James in issue #9.