Some information on this issue supplied by Tom Lammers, Dr. Michael J. Vassallo, and others via the Atlas/Timely discussion group. Distribution date from Joseph Marek's Marvel Comics Group history website. 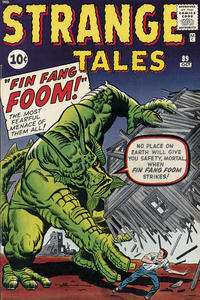 Job Number
V-318
Genre
fantasy-supernatural
Characters
Fin Fang Foom (introduction); Chan Liuchow; Chung Liuchow
Synopsis
A young historian from Taiwan crosses to the mainland to awake the dragon Fin Fang Foom and foil a communist invasion. He lures the dragon to the coast to wreck the invasion fleet, and then lures it back to its layer before restoring its mystical slumber.
Reprints

The Future (Table of Contents: 2)

The Green Things! (Table of Contents: 3)

Job Number
V-320
Genre
horror-suspense
Characters
Martin Kastle
Synopsis
A wealthy retiree keeps a magnificent greenhouse, where he talks to the plants. When a burglar tries to kill him, his plants come to life and stop the intruder, saving their friend's life.
Reprints

The Touch of Midas! (Table of Contents: 4)

Job Number
V-319
Genre
horror-suspense
Characters
Simon Kluge
Synopsis
A greedy man locates the source of Midas’s power, planning to stop the undesirable effects with gloves. He gains the power but finds that his gloves turn to gold, dooming him to the same fate as Midas.
Reprints