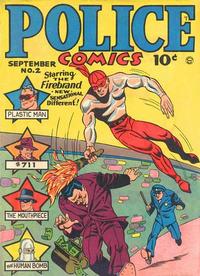 [The Revolt of General Muerte] (Table of Contents: 1)

First Line of Dialogue or Text
A prison's grey walls are witness to a new kind of knight errantry...
Genre
adventure; crime; detective-mystery; superhero
Characters
#711 [Daniel Dyce]
Synopsis
Daniel Dyce, Prisoner #711, serving a term for a crime he didn't commit, learns of criminal plots from convicts. Using an escape tunnel, he exits the prison and uses the information he's gained to take down criminals. A new inmate warns him of a heist by gangster Louie Lutz. #711 brings Lutz to justice.

First Line of Dialogue or Text
Crime and injustice have only one foe...the Sword...
Genre
detective-mystery; superhero
Characters
Chic Carter [The Sword]; Tamara de Vielle; Sebastian del Ricco
Synopsis
Chic is aboard a luxury liner heading for South America. He runs afoul of a murder plot in which he becomes the prime suspect. Carter solves the crime as the Sword and defended the honor of Tamara de Vielle, daughter of the ruler of Brazilia. But, despite his success, Chic is forced to flee from the authorities.

Jim Amash and Mike Kooiman, in the Quality Companion, categorically state that The Sword was created by Henkel.

Henkel himself said, in Alter Ego #48, that super-heroes didn't interest him. He was more into adventure stories, like those in the movies; he liked realism. Perhaps this was why Carter appeared in costume as The Sword for only a very short time. Added by Craig Delich 2014-1-3.

[The Hijacker] (Table of Contents: 8)

[The Hogan Brothers] (Table of Contents: 9)

[The Kidnapped Ambassador] (Table of Contents: 11)

Genre
superhero
Characters
The Human Bomb [Roy Lincoln]; Major Adams; the Nazis (villains)
Synopsis
Roy gathers up what notes he can from his father's lab and brings them to Major Adams at the War Department. Once again, however, Roy is attacked for his father's secret formula, and he chases the thieves to their underwater lair, where these members of a German suicide squadron conspire to use the formula to destroy eastern seaports.
Keywords
27-QRX

Even though the Who's Who doesn't list Gustavson as a writer of the strip, Mike Kooiman and Jim Amash state in the Quality Companion that he created the strip and wrote it, so the question mark with the script credit has been removed by Craig Delich 2013-1-18. Also verified by Gustavson's son, Terry Gustafson.