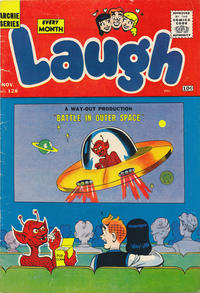 Too Much Talent (Table of Contents: 1)

Genre
humor; teen
Characters
Archie Andrews; Jughead Jones; Betty Cooper; Veronica Lodge; Reggie Mantle; Mr. Lodge
Synopsis
When word gets out that Mr. Lodge has bought a major talent agency, all the kids rush over to his house to audition for him, whether he likes it or not.
Reprints
Keywords
accordion; imitations; saxophone; talent agency

Reggie is imitating Edward G. Robinson while Betty does a mean Katharine Hepburn.

Genre
humor; teen
Characters
Betty Cooper
Synopsis
Betty exploits the fact that a call always comes just as soon as you get into the bathtub.
Keywords
bath; telephone

Mention is made of the "Lindy Hop of 15 years ago."

Genre
humor; teen
Characters
Betty Cooper; Veronica Lodge; Mr. Lodge; Gaston
Synopsis
Mr. Lodge insists that Veronica help out with household chores, but she manages to screw up one chore after another by accident... or is it an accident?
Reprints
Keywords
button; flowers; gardening; petunias; sewing; weeds

Tops on Your Christmas List! (Table of Contents: 6) (Expand) /

List of 40 persons (ages 8 to 15) desiring pen pals. In addition to the United States, countries include Canada.

The Tyranny of the Cobra God (Table of Contents: 11)

Genre
superhero
Characters
The Fly [Tommy Troy]; Ganza the Great
Synopsis
While tunneling through a mountain in India, the Fly uncovers an ancient Hindu tomb which contains a chest containing the remains of a magician who died in 900 A.D. The Fly opens the chest and the magician is reincarnated in the form of a Cobra-god statue. He plans on world domination unless the Fly discovers a way to defeat him.
Keywords
bomb; cobra; Hindu; India; invulnerable; mountain; reincarnation; tomb; tunnel