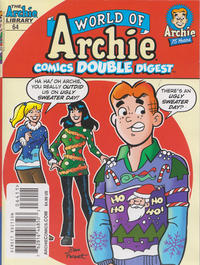 The pencils appear to be Al Hartley, not those who are credited. See Betty's hairstyle and Jughead's hat, which is small for his head.

Lettering also appears to be Al Hartley, which would be normal for a story he drew.

Henry Scarpelli would be an unusual choice to ink Al Hartley, and with the other credits being listed incorrectly, the inker credit is suspect.

Engage the Enemy (Table of Contents: 5)

Season of Magic (Table of Contents: 6)

The Presents (Table of Contents: 7)

Genre
humor; teen
Characters
Josie; Melody; Pepper
Synopsis
Melody tries to protect Pepper from the advances of a nerdy boy by seducing him away from Pepper.
Reprints

Genre
humor; teen
Characters
Josie; Melody; Pepper; Albert
Synopsis
The others gently mock Melody for her absolute faith that all the predictions in her dream-interpretation book will come true. Then they start coming true.
Reprints
Keywords
billboard; dreams; wet cement

Genre
humor; teen
Characters
Josie; Mr. Jones; Pepper; Albert
Synopsis
On her way to a violin lesson, an increasingly absent-minded Josie realizes that she forgot her violin at home, and sends Albert to get it.
Reprints
Keywords
bullies; memory; violin

All Unstrung (Table of Contents: 14)

In most stories Josie's last name is McCoy. In a few, like this one, it is Jones.

Defeat From Within (Table of Contents: 24)

Could be from Betty and Veronica Double Digest Magazine (Archie, 1987 series) #168 but needs confirmation.

Archie # 419 (apparently the first publication of this story) credits Frank Doyle with the script.

You Are What You Eat (Table of Contents: 29)

What's For Breakfast? (Table of Contents: 31)

A Touch of Glass (Table of Contents: 33)

The Bear Truth (Table of Contents: 34)

Genre
humor; teen
Characters
Fred Andrews; Mary Andrews; Archie Andrews; Jughead Jones
Synopsis
Mr. Andrews is convinced there is a bear in his kitchen but it is only Jughead in a fur coat.
Reprints

[Betty and Veronica by Rachel Antonoff] (Table of Contents: 37) (Expand) /

Someone to Watch Over Me (Table of Contents: 38)

Jon D'Agostino credits in this reprint do not match the original credits on this story.

Writers of the Lost Art! (Table of Contents: 39)

Genre
humor; teen
Characters
Miss Grundy; Mr. Weatherbee; Betty Cooper; Veronica Lodge
Synopsis
Miss Grundy and Mr. Weatherbee agree to let the girls be in charge of the school's Christmas decorations. Betty and Veronica decide to start with boxes of Christmas decorations in the old storeroom in the basement. As they're unloading, they come across some mistletoe, so they hang some above the door to Study Hall, and pounce on Archie with smooches when he walks under it. A little while later, Veronica finds a Santa suit and puts it on, only to have Betty show up in an identical suit.
Reprints
Keywords
Christmas; mistletoe

First Line of Dialogue or Text
What did you get Ronnie for Christmas, Mr. Lodge?
Characters
Archie Andrews; Jughead Jones; Hiram Lodge
Synopsis
What did Mr. Lodge get Veronica for Christmas.
Reprints
Keywords
Christmas

[Subscribe to all your favorite comics double digests...] (Table of Contents: 47) (Expand) /