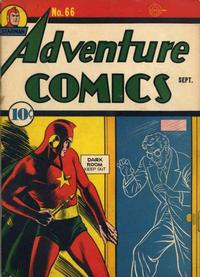 The Case of the Camera Curse! (Table of Contents: 2)

Genre
superhero
Characters
The Starman [Ted Knight]; Woodley Allen; Doris Lee; Police Captain Ryan; Cuthbert Cain (villain, introduction, death)
Synopsis
Starman must face a man who uses a forbidden voodoo formula, combined with the properties of photo-electric cells, to capture the souls of men and control the will of anyone whose image he captures in his camera!
Reprints
Keywords
Gravity Rod

Artist Burnley left the star off of Starman's chest in the splash panel.

The Shining Knight (Table of Contents: 3)

The Black Tanker by Howard Pease (Table of Contents: 6)

Hear Superman on the Radio! (Table of Contents: 7) (Expand) /

[Trouble in Tibet] (Table of Contents: 9)

[The Girl Behind the Wall] (Table of Contents: 10)

[Danger from Train to Plane] (Table of Contents: 14)

Genre
superhero
Characters
The Sandman [Wesley Dodds]; Dian Belmont; Edgar Edley (villain)
Synopsis
As Dian is returning home, her train is suddenly derailed and drawn toward a weird ball-tank object, whose comet-ray is violently drawing all the gold aboard the train to it. When Sandman investigates, he finds the scientist behind it, and learns that this object draws its amazing power from the the tail of a comet, power which also enables the mad scientist to become young again!