Al Hubbard may have assisted on art.

Cover logo design credit from Todd Klein via his Facebook posting Comics Logos B #6: WALT DISNEY'S BAMBI, on 23 March 2021. Klein states he seen the logo on one of the Bambi movie posters and perhaps was done by someone from Disney Studios or cover artist Ken Hultgren. 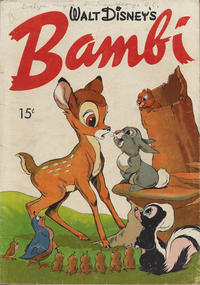 [Bambi and Friends] (Table of Contents: 1)

Genre
adventure; animal; anthropomorphic-funny animals
Characters
Bambi; Faline; Thumper; Flower; Friend Owl; Great Stag; Ronno
Synopsis
The adventures of Bambi and his friends as he grows from a new-born fawn into his birthright as Prince of the Forest.

Al Hubbard may have assisted on art.

Based on the 1942 Walt Disney animated feature "Bambi," which was adapted from the 1928 novel "Bambi, A Life in the Woods" by Felix Salten. A sequel appears in Bambi's Children Four Color #30.

[Great Prince of the Forest] (Table of Contents: 3)

Genre
anthropomorphic-funny animals
Characters
Bambi
Synopsis
Outlined against a sunset, the adult Bambi stands on a bluff and surveys his domain.
Reprints

Inside back cover; color.