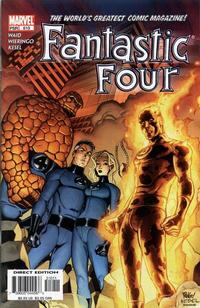 The Fantastic Four (Table of Contents: 1)

Recap of the events which led to the start of this issue with credits and indicia.

Cardboard Insert with ads for NBC's two new toon series with two "Challenge Cards" each for new tv series "Kenny the Shark" and "Tutenstein". Insert is not included in total page count.