Orrgo, the Unconquerable! (Table of Contents) 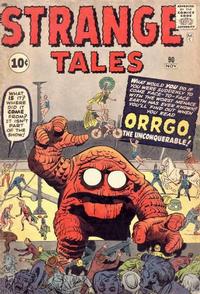 Orrgo... The Unconquerable! (Table of Contents: 1)

Job Number
V-364
Genre
science fiction
Characters
Orrgo (introduction); Jo-Jo
Synopsis
An alien race with immense telepathic and telekinetic powers send one of their kind to conquer Earth. He easily defeats the police and army and freezes Washington, DC in a block of ice, but is killed by a gorilla while resting because he only prepared defences against humans.
Reprints
Keywords
monsters

Job Number
V-365
Genre
science fiction
Characters
Adam; Eve
Synopsis
A scientist prolongs his life for a thousand years, outliving all his friends as Earth becomes overpopulated. When Earth is abandoned he stays behind with one young woman, leaving only the two of them, Adam and Eve, to restart civilization.
Reprints

The Inhuman! (Table of Contents: 4)

Job Number
V-366
Genre
science fiction
Characters
X-35
Synopsis
In a war against robots, the robots try to find a way to break the human defenses by sending a robot spy disguised as a human. The spy leads them into a trap, and they discover that their spy was a human disguised as a robot.
Reprints

Job Number
V-367
Genre
science fiction
Characters
John Marshall; Molitis germ
Synopsis
A medical researcher on a boat enlarges a germ to human size, causing it to attack him and hijack the boat. The germ lands on an island in order to make an army of enlarged germs, but an atomic test destroys it.
Reprints
Keywords
monsters