Distributed to newsstands in August 1961 (August 8 according to Joseph Marek's Marvel Comics Group, August 22 according to Bob Bailey). This issue includes 10 pages of paid advertisements (pages 2, 9, 15, 19, 25, 27, 33-36 of comic including inside front cover, inside back cover and back cover); pages of comic not numbered.
On sale date as given in the copyright application as listed in the Catalog of Copyright Entries, Periodicals, July-December 1961, page 365, registration number B917820.

The Creature in the Black Bog! (Table of Contents) 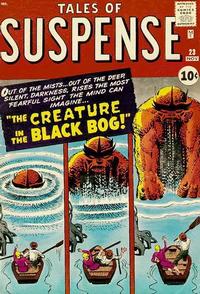 I Entered the Dimension of Doom! (Table of Contents: 1)

Job Number
V-356
First Line of Dialogue or Text
Out there among the stars exist countless other worlds!
Genre
science fiction
Characters
John Cummings
Synopsis
A teenager uncovers a plot of two-dimensional beings to invade Earth by posing as a construction crew to dig a hole in the street that acts as a passageway between dimensions and thwarts their designs.
Reprints
Keywords
hypno-ray

The Wish (Table of Contents: 2)

The Creature from the Black Bog! (Table of Contents: 3)

Job Number
V-357
First Line of Dialogue or Text
At last we've sold the store, Martha!
Genre
science fiction
Characters
John; Martha
Synopsis
A retired couple exploring the Everglades comes upon an alien who has been mired in the bog after landing to affect repairs and was making his way back to the ship. In exchange for their help in securing enough vines to pull him free of the bog, he removes their memories of the incident and makes them younger.
Reprints
Keywords
Florida; Fountain of Youth

Going Down! (Table of Contents: 4)

Job Number
V-358
First Line of Dialogue or Text
The seeds of mystery and danger can grow anywhere!
Genre
horror-suspense
Characters
Simon Queel; Luther Zoroni; Mr. Cartwright
Synopsis
A greedy elevator operator fakes an accident to get a rich customer to give him a big tip, but the elevator falls forever as the suddenly sinister passenger promises he’ll get his reward.
Reprints

The Changeling (Table of Contents: 5)

Job Number
V-359
First Line of Dialogue or Text
Bored with the present?
Genre
science fiction
Characters
John; Alana; King (dog)
Synopsis
A teenager in the future desires to return to Earth despite scientist's warning that over thousands of years humans are no longer adapted to life on Earth. When the boy steals a rocket ship and makes the faster than light journey back to the original homeworld, he finds that the scientists were indeed correct as his rocket ship is only about an inch tall to the Earthmen.
Reprints
Keywords
Centaurius II (planet)