The Creature from Krogarr! (Table of Contents) 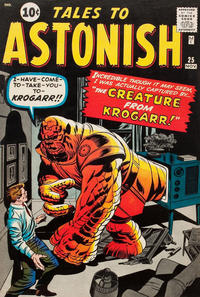 I Was Captured by the Creature from Krogarr! (Table of Contents: 1)

Job Number
V-351
First Line of Dialogue or Text
I've always been a happy-go-lucky guy!
Genre
science fiction
Characters
Joe Hanson; Clara Hanson; Creature from Krogarr
Synopsis
A dissolute human is targeted by an alien that can transport items through television sets, but he is saved by his failure to pay the electric bill.
Reprints

The Party (Table of Contents: 2)

Job Number
J-959
First Line of Dialogue or Text
With a flower in his button-hole, a broad smile on his face, and a...
Genre
humor
Characters
Mr. Braggle
Synopsis
A salesman trying to unload some oil stocks thinks that he’s found a rich mark, but instead walks into a party of talking dogs.
Reprints

Behold Him! He Is the Martian! (Table of Contents: 3)

Job Number
V-352
First Line of Dialogue or Text
Wanna see how it feels to be the first man to Mars?
Genre
science fiction
Characters
"Danny Blake"; Agent X
Synopsis
A spy from Jupiter disguised as a human stows away on the first rocket from Earth to Mars. The pilot is a Martian spy disguised as Earthman Dan Blake whose mission is to radio back to Earth that a radiation belt with fatal effects makes attempting to reach Mars too dangerous so Earthmen will give up their attempts to reach Mars. The spy from Jupiter overcomes the Martian and radios Jupiter that travel to Mars is safe, and then radios the Martian's story back to Earth so as to discourage Earthlings from space flight.
Reprints

The Gypsy's Revenge! (Table of Contents: 4)

Job Number
V-353
First Line of Dialogue or Text
Some there are, who are the victims of criminals...
Genre
horror-suspense
Characters
Monk Morgan
Synopsis
An American criminal robs an old gypsy man, ignoring his pleas and curses. When he returns to the United States he sees a fortune teller at a circus, and finds the tent suspended in the void, with the fortune teller revealed as the old man.
Reprints

Where Lurks the Ghost! (Table of Contents: 5)

Job Number
V-354
First Line of Dialogue or Text
Joe, are you still saving these whacky clippings about haunted houses?
Genre
horror-suspense
Characters
Joe; Mike
Synopsis
A man spends the night in a haunted house with the house’s caretaker. He thinks that he didn’t see a ghost, but the caretaker was killed years ago.
Reprints