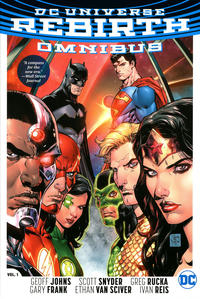 First Line of Dialogue or Text
As the writer of Green Lantern: Rebirth and The Flash: Rebirth...

The Clock Is Ticking Across the DC Universe!, Chapter 1: Lost (Table of Contents: 4)

Genre
superhero
Characters
Batman [Bruce Wayne]; Kid Flash [Wally West]; Flash [Barry Allen] (flashback); Iris West (flashback)
Synopsis
Wally West, who has not been seen in the new 52 Universe, finds himself aged back to a youthful Kid Flash existing outside of the normal timeline. He appears to Batman hoping that Bruce will remember him and help him, but gets pulled back into the Speed Force before that happens. Wally recalls how the New 52 Universe was formed as the result of undoing the Flashpoint universe, but only Wally is aware that some outside force manipulated events so that some things were different in the New 52 Universe than in the pre-Flashpoint universe, including stealing 10 years from the heroes lives.
Reprints

Batman is seen in the Batcave pondering what the Mobius Chair meant when it told him that there were 3 Jokers (as shown in Justice League (2011 series) #50. In an attempt to get through to Batman, Wally tells Bruce to remember how he got the letter from his father Thomas. This letter had been brought back from the Flashpoint universe by Barry Allen and given to Bruce (as shown in the Flashpoint 2011 mini-series).

The Clock Is Ticking Across the DC Universe!, Chapter 2: Legacy (Table of Contents: 5)

The Clock Is Ticking Across the DC Universe!, Chapter 3: Love (Table of Contents: 6)

Genre
superhero
Characters
Kid Flash [Wally West]; Grail; Darkseid; Green Arrow [Oliver Queen]; Black Canary [Dinah Lance]; Superman [Clark Kent]; Lois Lane; Mr. Oz; Aquaman [Arthur Curry]; Mera; Linda Park
Synopsis
The Superman of the New 52 universe has died, and heroes gather at the site where he fell to pay their respects. Green Arrow and Black Canary, who are strangers in the New 52 universe, sense a past connection. Clark, Lois, and Jon from the pre-Flashpoint universe try to keep a low profile, but Clark is confronted by Mr. Oz with a mysterious warning. Aquaman proposes to Mera. Wally, seeking to return to the normal timeline, is drawn to his anchor Linda Park, but Linda does not remember him, and a heart-broken Wally, without the bond of Linda's love, is drawn back into the speed force.
Reprints

The Clock Is Ticking Across the DC Universe!, Chapter 4: Life (Table of Contents: 7)

Genre
superhero
Characters
Kid Flash [Wally West]; Batman [Bruce Wayne]; Flash [Barry Allen]; Gotham [Hank Clover]; Gotham Girl [Claire Clover]; John Constantine; Swamp Thing [Alec Holland]; Captain Boomerang [George Harkness]; Cyborg [Victor Stone]; Nightwing [Dick Grayson]
Synopsis
Rejected by Linda, Wally bounces in and out of the timeline appearing to those he is familiar with. However, no one remembers him. Finally, he appears before Barry Allen. Initially Barry does not remember him either, but as Wally is about to dissolve out of existence, Barry suddenly remembers and pulls Wally from the Speed Force into the normal timeline, restoring Wally to life. Meanwhile, Batman discovers an object in the Batcave that was left behind when Wally was drawn back into the speed force.
Reprints

All black page appearing before the epilogue

The Clock Is Ticking Across the DC Universe!, Epilogue (Table of Contents: 9)

Genre
superhero
Synopsis
On Mars, a broken watch is pulled apart and repaired, apparently a parallel as to what happened to the DC Universe when the Flashpoint Universe transitioned to the New 52 Universe. Two unseen characters discuss if they did the right thing.
Reprints

The imagery of the watch cogs, the clock-face with Roman numerals, the planet Mars, one of the voices belong to a character named Adrian, and the other voice using blue caption boxes, suggests that the two characters are Ozymandias [Adrian Veidt] and Doctor Manhattan of the Watchmen.

Genre
superhero
Characters
Superman [Clark Kent]; Lana Lang
Synopsis
The Superman from the post-Crisis universe runs into Lana Lang at Superman's tomb. After relating the story of his death and resurrection to Lana, the two take Superman's remains to his Fortress of Solitude. But they find the elements necessary to bring Superman back to life are missing from this universe, and Superman helps Lana put the remains of his doppelganger to rest between his parents' graves.
Reprints

Genre
superhero
Characters
Green Lantern [Hal Jordan]; Green Lantern [Jessica Cruz]; White Lantern [Kyle Rayner]; Star Sapphire [Carol Ferris]; Ganthet; Sayd; Parallax; Larfleeze [Agent Orange]; Indigo-1 [Iroque]; Sinestro Corps [Yellow Lantern [Thaal Sinestro]; Yellow Lantern [Lyssa Drak]]
Synopsis
With the Green Lantern Corps having vanished from the universe, the Sinestro Corps is now the supreme force for order in the universe. Their home base of Warworld now exists where Oa used to be at the center of the universe. Their rise to power has weakened and aged Sinestro. Meanwhile, Hal Jordan has been corrupted by the power of Krona's energy gauntlet. He forges a new power ring to regain his humanity and become a Green Lantern again, with a mission to find the lost members of the Green Lantern Corps.
Reprints

The Drowning, Prologue: After the Deluge (Table of Contents: 28)

Genre
superhero
Characters
Green Arrow [Oliver Queen]; Black Canary [Dinah Lance]
Synopsis
Oliver investigates the disappearance of homeless people in Seattle and encounters Black Canary who has come to Seattle to find herself. Together they team up and find that the Underground Men are kidnapping the homeless people.
Reprints

Credited to Carlos D'Anda in error.

The Imitation of Life, Prologue (Table of Contents: 34)

Fear the Reaper (Table of Contents: 40)

Genre
superhero
Characters
Justice League [Aquaman [Arthur Curry]; Batman [Bruce Wayne]; Cyborg [Victor Stone]; Flash [Barry Allen]; Green Lantern [Jessica Cruz]; Green Lantern [Simon Baz]; Superman [Clark Kent]; Wonder Woman [Diana]]; Lois Lane; Jon Kent
Synopsis
Still reeling from the death of their Superman, the Justice League is aided by the Superman from another universe in defeating a "reaper," a techno-organic being sent to begin the harvesting of Earth. Along with two newly-assigned Green Lanterns, they repel the reaper and send a warning to others that Earth is protected by the Justice League.
Reprints

Batgirl and the Birds of Prey: Rebirth (Table of Contents: 49)

Red Hood and the Outlaws: Rebirth (Table of Contents: 55)

Genre
superhero
Characters
Amanda Waller; Suicide Squad [Colonel Rick Flag; Harley Quinn [Harleen Quinzel]; Captain Boomerang [George Harkness]; Deadshot [Floyd Lawton]]; Mark Ljungberg
Synopsis
Having learned of the existence of the Suicide Squad, the President wants to shut it down. Waller convinces the President to allow it to continue with a military man in charge, Colonel Rick Flag. When the president approves, Waller travels to Guantanamo Bay where Flag has been held as a captive since refusing to carry-out illegal orders from a superior some time ago. She convinces him to lead the Squad. Their first mission: travel to Mongolia to rescue a scientist who has built a meta-bomb that, when detonated, will give super powers to the terrorist group that possesses it.
Reprints

The Professional, Prologue (Table of Contents: 61)

Will the Real Blue Beetle Please Die! (Table of Contents: 67)

Batman Beyond (Table of Contents: 89)