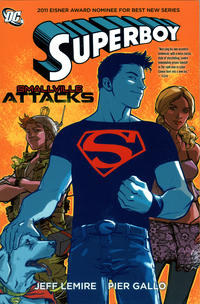 Genre
superhero
Characters
Superboy [Conner Kent]; Krypto; Simon Valentine; Mr. Gilliam; Poison Ivy; Parasite
Synopsis
Poison Ivy convinces Superboy to work with her to find the cause of the rapidly growing plants. They trace the phenomena to a local farmer attached to a bizarre mechanism. Ivy turns on Superboy, to take the raw power of the machine for herself, but Simon arrives with his newly created Parasite Frogs, which sap Ivy's power. Worried it is about to explode, Superboy flies the mechanism into the air, but all it does is flash and disintegrate. In the aftermath, Simon and Conner uncover an ancient relic, while elsewhere two farmers discuss how these events fit into their plans for Smallville.
Reprints

The New Adventures of Psionic Lad, Part One (Table of Contents: 9)

Genre
superhero
Characters
Superboy [Conner Kent]; Krypto; Lori Luthor; Simon Valentine; Martha Kent; Mr. Gilliam; Psionic Lad; The Prime Hunter; Poison Ivy (memory)
Synopsis
Superboy and Psionic Lad hold off the hunting party, which retreats when Simon arrives. Back at the Kent farm, Psionic Lad tells Simon and Conner that he comes from the future, from an underground resistance to an oppressive ruler called The Hunter. When his comrades were slain, young Psionic Lad headed to the past to seek out training from Superboy. Before settling in at the Kent farm, however, Simon suggests Psionic Lad use his abilities to help them find out what happened to Mr. Gilliam, which produces some results. Later, while Superboy meets with Lori, Psionic Lad reports on his progress.
Reprints

Genre
superhero
Characters
Superboy [Conner Kent]; Simon Valentine; Psionic Lad; Red Robin [Tim Drake]; Doomsday; Ray Palmer [The Atom]
Synopsis
After Superboy talks to Red Robin about his personal life, he is attacked by Doomsday over Detroit. While Conner gets the tar beaten out of him by the monster, Simon visits Ray Palmer in Ivy Town, unaware Psionic Lad is watching.
Reprints

Rise of the Hollow Men, Part One: Into the Broken Silo (Table of Contents: 21)

Rise of the Hollow Men, Part Two: In the Underworld (Table of Contents: 24)

Rise of the Hollow Men, Part Three: Time and Tannarak (Table of Contents: 25)

Genre
superhero
Characters
Superboy [Conner Kent]; Krypto; Phantom Stranger; Tannarak; Arion; Lord Wynde; Lady Chian; Viking Prince; Eben Took; William Took; Harold Took; Jonathan Talbot
Synopsis
After his attempts at conquest during Arion's day and the Viking Prince's day are thwarted by the Phantom Stranger, Tannarak finds allies in the Took family in 19th century Smallville. The plan started with the Took family over a century ago is coming to fruition today, as Tannarak has created an army of Superboy clones under his control he plans to animate with the souls of the people of Smallville.
Reprints

Cover is an homage to the Rafael Albuquerque cover of #1, as indicated by the "After Rafael" below Kerschl's signature.

Rise of the Hollow Men, Conclusion: The Neverending... (Table of Contents: 27)

Genre
superhero
Characters
Superboy [Conner Kent]; Krypto; Simon Valentine; Lori Luthor; Psionic Lad; Phantom Stranger; Tannarak; Parasite; Eben Took; William Took; Harold Took
Synopsis
While Simon and Lori deal with the Parasite and the Hollow Men, Superboy and Krypto put an end to Tannarak's plans. After Psion restores the souls of the people of Smallville to their proper homes, the group leaves the clones to their destruction, and returns to the pleasures of normal small-town life.
Reprints