Title only, embossed on black cover. 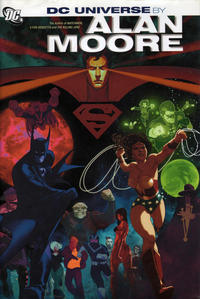 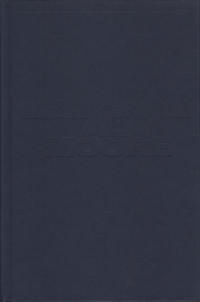 For the Man Who Has Everything... (Table of Contents: 3)

[DC Universe: The Stories of Alan Moore] (Table of Contents: 4)

Genre
superhero
Characters
Green Arrow [Oliver Queen]; Black Canary [Dinah Lance]; Pete Lomax
Synopsis
Black Canary and Green Arrow find that the crooks aren't as bold as they used to be. This leads to a discussion of how the bad crooks are getting worse. Then, from a rooftop, Black Canary is shot by an arrow.
Reprints

[DC Universe: The Stories of Alan Moore] (Table of Contents: 7)

Job Number
I-106
Genre
superhero
Characters
Vigilante [Adrian Chase]
Synopsis
A woman calls Adrian for help after her abusive husband is released from prison and threatens to come after her and her daughter. By the time Vigilante arrives, the woman is dead and her child is gone. He hunts for the girl and discovers that she has been taken in by a pair of very nice prostitutes but her father has discovered where she is hiding out and comes for her.
Reprints

[DC Universe: The Stories of Alan Moore] (Table of Contents: 13)

The Jungle Line (Table of Contents: 17)

[DC Universe: The Stories of Alan Moore] (Table of Contents: 18)

Genre
superhero
Characters
Green Lantern [Abin Sur]; The Empire of Tears; Qull of the Five Inversions; the Guardians of the Universe (cameo, flashback); Green Lantern [Hal Jordan]; Weaponers of Qward; Ranx, the Sentient City; Children of the White Lobe; Green Lantern [Sodam Yat, a Daxamite]; Green Lantern [Mogo]
Synopsis
Abin Sur seeks a crippled ship that has crashed on Ysmault, a lifeless planet in a forbidden territory by the Guardians. There Abin finds The Empire of Tears-- hellish demons that taunt him, including Qull of the Five Inversions. Qull freely answers three questions for Abin about the crippled ship, Abin's future and the Guardians' greatest catastrophe. And in doing so destroys Abin Sur years in the future.
Reprints

[DC Universe: The Stories of Alan Moore] (Table of Contents: 22)

In Blackest Night (Table of Contents: 23)

Genre
superhero
Characters
Green Lantern [Katma Tui]; Guardians of the Universe; F-Sharp Bell [Rot Lop Fan] (a blind Green Lantern)
Synopsis
Katma Tui is sent by the Guardians to recruit a new member to the Corps-- one who is blind and has no concept of light or color.
Reprints

Colors credit confirmed by Anthony Tollin.
Cover art is an homage to the cover of Superman Annual (DC, 1960 series) #1.

Whatever Happened to the Man of Tomorrow? (Table of Contents: 27)

Whatever Happened to the Man of Tomorrow? (Table of Contents: 28)

Genre
superhero
Characters
Superman [Jordan Elliot; also as Nightwing (in photo)]; Lois Lane Elliot; Tim Crane; Lana Lang; Jimmy Olsen [also as Elastic Lad; also as Flamebird (in photo)]; Perry White; Alice White; Krypto; Brainiac; Lex Luthor; Kryptonite Man; Legion of Super-Villains [Cosmic King; Lightning Lord; Saturn Queen]; Captain Marvel [Billy Batson]; Vartox; Superwoman [Kristin Wells]; Robin [Jason Todd]; Batman [Bruce Wayne]; Wonder Woman [Diana Prince]; Martian Manhunter; Green Arrow [Oliver Queen]; Hawkman [Katar Hol]; Mr. Mxyzptlk; Jonathan Elliot
Synopsis
Lois continues to relate how when Superman was holed up in the Fortress with his closest friends, being attacked by Brainiac (having taken over Luthor's body), the Kryptonite Man, and the Legion of Super-Villains, he realized who the mastermind behind it all was, and called on Mr. Mxyzptlk to show himself. Just as Superman sent Mxyzptlk into the Phantom Zone, Mxy fled to his own dimension, tearing himself apart. Having taken a life, Superman exposed himself to gold kryptonite and retired. The interview over, Lois, her husband Jordy, and their infant son Jonathan settle in for a quiet evening.
Reprints

The Big Chill (Table of Contents: 30)

Genre
detective-mystery; horror-suspense
Characters
Voodoo; Freda; Christian Charles; Detective Frank Chaney; Claude; Fisko; Purity; Dave (Frank's partner); Carrefour
Synopsis
Voodoo starts working as a dancer at a lounge run by Christian Charles where several dancers have disappeared or turned up dead. Detective Chaney's investigation makes Charles uncomfortable and he calls on an evil entity called Carrefour to kill him. Meanwhile, forces opposed to Carrefour seem to be preparing Voodoo without her knowledge to be their pawn in the looming confrontation with Charles and Carrefour.
Reprints

Byblows, Part One (Table of Contents: 40)

[DC Universe: The Stories of Alan Moore] (Table of Contents: 45)