No month is given on the cover or in the indicia. Based on the copyright dates of this issue and others in the series released around the same time, one can determine that this issue was published with other Four Color issues bearing an "April-June 1961" cover date.

Also exists in a version for which the final page is an ad for Twinkles cereal, rather than the Dalmatian Diary story. 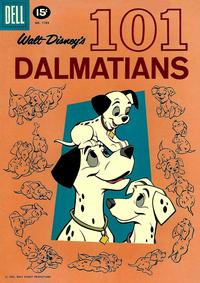 One Hundred and One Dalmatians [101 Dalmatians] (Table of Contents: 1)