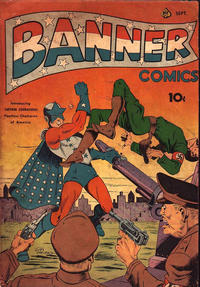 First Line of Dialogue or Text
Mighty warrior!!! Master of the miraculous defender of liberty...
Genre
superhero
Characters
Captain Courageous (introduction); The Nazis (villains)
Synopsis
Captain Courageous,innocently enough, stops kids from bullying a girl and it snowballs into stopping a Nazi invasion of the United States.

The Nazi army is equipped with super-weaponry that would be familiar to readers of Whiz Comics #3, right down to super-planes able to drop tanks.

First Line of Dialogue or Text
The dictator's shadow is falling across civilization...
Genre
superhero
Characters
The Lone Warrior [Stan Carter] (introduction); Dicky [Richard Carter] (Stan's younger brother, introduction); The Dictator's Shadow (villain, introduction); enemy saboteurs [Kampf; two others unnamed] (villains, introduction for all)
Synopsis
Lone Warrior enlists in the U.S. Army and is stationed right by the boys' camp where his kid brother is in attendance. The two join forces to stop saboteurs at the Army base who are working for the Dictator's Shadow.
Keywords
Camp Trenton; Wonder Ship

There are noticable themes here: the patriotism, the Army private who is secretly a superhero, the kid sidekick, the chemistry-related origin, the murder attempts on Army generals....all of which parallel Captain America.

Binder is credited as a writer of this story by Bails's Who's Who.

last app. in OUR FLAG COMICS #1

First Line of Dialogue or Text
Kay McKay, an air hostess on 'World Wide Airlines'...
Genre
adventure
Characters
Kay McKay; Ned
Synopsis
Ned and Kay are asked by the American Consul in Mexico City to return diamonds to Brazil, but gangsters have other plans.

last app. in OUR FLAG COMICS #1. Though "only" an air stewardess, Kay can outfly her pilot, shoot a revolver, disable a plane, and stop an alligator.