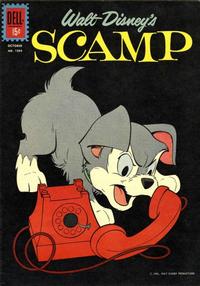 Inside front cover; black and white. Top half of page.

The Champ (Table of Contents: 2)

Inside front cover; black and white. Bottom half of page.

Genre
anthropomorphic-funny animals
Characters
Scamp; Dumbo; The Great Geezbo
Synopsis
The Great Geezbo wants to be the star of the circus. He gives Dumbo sleeping salts so that Dumbo will miss rehearsals. Scamp uncovers the plot.
Reprints

Genre
anthropomorphic-funny animals
Characters
Scamp
Synopsis
Scamp tries to get away from a girl dog and ends up trapped in quicksand.
Reprints

The People Watchers (Table of Contents: 6)

One for the Book (Table of Contents: 7)

Genre
anthropomorphic-funny animals
Characters
Scamp
Synopsis
Scamp gets a powerful horseshoe magnet from a junkyard, but it causes all kinds of trouble.
Reprints

The House Mouser (Table of Contents: 9)

Genre
anthropomorphic-funny animals
Characters
Scamp; Lady; Tramp
Synopsis
Scamp chases some mice on and around a pool table in the basement of his master's house.
Reprints