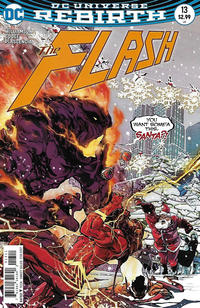 Barry does not appear in costume in this issue except for a one-panel flashback.

Women whom Barry has dated in the past are shown in flashback: Patty Spivot, Meena Dhawan, and Jessica Cruz (with whom Barry went on a date with in Justice League #6-7 (2016 series)).