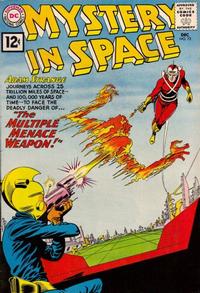 The traffic patrolman shows up a few times, with Adam disappearing each time. Pencil and ink credits confirmed from Julius Schwartz's editorial records, provided by DC Comics. Story is in two parts of 8.67 and 5.67 pages.

People Are People! (Table of Contents: 4)

This has been credited to both Don Cameron and Lou Cameron by other indexers. The art is not by Bernard Baily.

On the page immediately following page 9 of the previous story sequence.

Re-Live the Adventures of Superman When He Was a Boy! (Table of Contents: 5) (Expand) /

Information for this sequence from Arthur Lortie.

Letters of comment from Bill Sarill, Mike Donnelly, G.B. Love (RBCC fanzine publisher), Richard West, Steve Rettig, and Ken Gentry (who was awarded all 17 pages of the original Adam Strange art from MIS #71 for his letter).

Doom-Trap for Earth! (Table of Contents: 9)

Credits for script, pencils and inks, and page count, confirmed from Julius Schwartz's editorial records, provided by DC Comics. This issue's letter column confirms Sid Greene as the artist and adds that editor Julius Schwartz was used as a model for a Venusian on page 5, second panel.