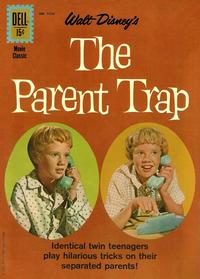 The Parent Trap (Table of Contents: 1)

Inside front cover; black and white. Six photos from the movie with typeset text underneath.

Genre
humor; romance
Characters
Susan Evers; Sharon McKendrick; Mitch Evers; Margaret McKendrick [Maggie McKendrick]
Synopsis
Twin girls, who had been separated since birth due to divorce, meet at summer camp. The pair change places and go home to meet the parent that they never knew. Later the twins conspire to get their parents to reunite.

Adapted from the 1961 Walt Disney movie "The Parent Trap."

Genre
non-fiction
Synopsis
How twins were treated in various cultures in the past.

Back cover. This sequence is replaced with an ad in some copies. See Sequence 5.