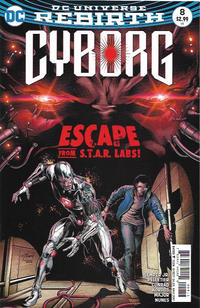 Genre
superhero
Characters
Xenephon "Exxy" Clark; Officer Cicero Truit; Officer Bronson Fairfax; Cyborg [Victor Stone]; Dr. Silas Stone doppelganger [O.T.A.C.; Anomaly]; unnamed S.T.A.R. labs guards; Variant [Scarlett Taylor]; Dr. Silas Stone; Aldous (man/machine hybrid, Dr. Stone's captor)
Synopsis
Victor enlists Xenephon "Exxy" Clark, a young Tech thief, on a mission to break into S.T.A.R. Labs. Once inside Exxy learns that the Victor that appeared to him was an emergency hologram program that activated to bring help to the real Victor who had been deactivated and held prisoner by the Dr. Silas Stone doppelganger. Once activated, Victor and Exxy are confronted by S.T.A.R. Labs guards and the doppelganger, who reveals himself to be O.T.A.C., but who is O.T.A.C. and what is his connection to the real Silas Stone?
Reprints
Keywords
S.T.A.R. Labs

Dr. Silas Stone doppelganger, who has been impersonating the real Dr. Silas Stone since at least issue #2, reveals himself as a being called O.T.A.C., a creation of the real Silas Stone. His origin is revealed in issue #9, where he also refers to himself as Anomaly.