Lo-Karr Bringer of Doom!; Mr. Gregory and the Ghost! (Table of Contents) 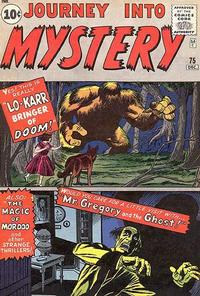 Job Number
V-415
Genre
science fiction
Characters
Lo-Karr
Synopsis
As international tensions mount, an alien lands and demonstrates its power before leaving, promising to return with an army. The world powers set aside their differences to prepare to defend themselves, but the alien was a robot created by a scientist hoping to inspire this reaction.
Reprints

Mister Gregory and the Ghost! (Table of Contents: 2)

Job Number
[V-414 ?]
Genre
horror-suspense
Characters
Lucius P. Gregory
Synopsis
A homebuilder who uses shoddy materials and unskilled labor gets his comeuppance when he builds a home for himself out of the wood from haunted trees. He tries and fails several times to drive the ghost out of the house, but stubbornly refuses to admit failure. He bankrupts himself when he tries to move the entire house away from the ghost not realizing that the house itself is the ghost.
Reprints

Inker changed back to Dick Ayers based on signed original art from the story. (9/2021)

Job Number
8745
Genre
science fiction
Characters
Monangahela Munroe
Synopsis
The first explorer on Venus is caught in an old bear trap, but he is able to use the wildlife to call for help.
Reprints

Text story with illustration. All future reprints of "The Hills of Venus" used this title. Sequence added by Bob Bailey, 2 September 2005 (Per Sandell ed.).

The Magic of Mordoo! (Table of Contents: 4)

Job Number
V-416
Genre
horror-suspense
Characters
Franz Kopnik; Katrina Steuben; Mordoo
Synopsis
A man falls in love with a middle-aged woman on vacation, but wants a younger wife. He convinces her to let a gypsy magician make her young again, but once she's young and pretty she leaves him for the young attractive gypsy.
Reprints

The last four panels on page 5 were likely redrawn by Sol Brodsky. Info per Nick Caputo.

The Man Who Lost the World! (Table of Contents: 5)

Job Number
V-417
Genre
science fiction
Characters
Bruno
Synopsis
A scientist's assistant is determined to find if his time machine that sends objects into the past or future. He steals some gold ingots from the office and steps into the ray, knowing that he can never return to the present. When his journey ends, Earth is so primitive that he is cut off from all humanity, and he realizes that he still doesn't know whether the machine sends things into the past or future since it could be either the dawn or the end of time.
Reprints