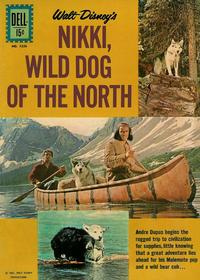 Nikki, Wild Dog of the North (Table of Contents: 1)

Inside front cover; black and white. Six photos from the movie with typeset text.

Genre
adventure
Characters
Nikki (dog); Neewa (bear); Andre Dupas; Makoki; Jacques LeBeau; Durante
Synopsis
Nikki becomes separated from his owner on a trip for supplies in the Canadian Rockies. After a life in the wild, he is captured by a pair of trappers, one of whom uses a club on Nikki until he is suitable for a dogfight. Nikki wins the dogfight, but when he is claimed by his former owner, must learn to return to domesticated ways.
Reprints

The Factors (Table of Contents: 3)

Genre
non-fiction
Synopsis
Background feature about the work of the "factors" (agents) in the North Country.
Reprints

Back cover. Panels with typeset text underneath. This sequence is replaced by an ad in some copies; see Sequence 5.