Indicia title is "DANGER MAN, No. 1231." No code number. Copyright 1961 by Independent Television Corporation. Based on the British TV series "Danger Man" which, at this time, was airing on CBS in the US (the series was revived in the UK in 1964 as "Danger Man" and aired in the US as "Secret Agent" (see Secret Agent (Gold Key, 1966 series)).
On sale date is Library of Congress copyright record publication date.

[Murder on the Midway] (Table of Contents) 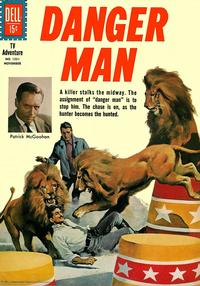 [Murder on the Midway] (Table of Contents: 2)

Genre
spy
Characters
John Drake
Synopsis
John Drake goes undercover as part of a riding act to prevent the murder of a Prime Minister who is attending a circus with his son.

Story just has "Danger Man". Title is from introduction on inside front cover. Two-page splash panel across the centerfold. Two full page panels near the end of the story.

Actors or Killers (Table of Contents: 3)

Genre
non-fiction; nature
Synopsis
Head shots of various circus animals with brief comments about the danger each one is capable of committing.

Back cover. Illustrations of the flags of the 15 nations making up NATO (North Atlantic Treaty Organization).